I can't believe it is September 1, where did the summer go?


Over the last few weeks, I adventured into several new photography realms. Since beginning Project 365, I have taken a photo everyday almost everyday, now numbering a total of some 20,000. Please bare in mind, I often shot in JPEG/Raw and recently began shooting for HDR, which requires 3 separate photographs. I have viewed an endless number of photos, my own and thousands via internet.  I was becoming, can I say, a bit bored with the different image but same photo look and felt it was time for something new.

There is so much that can be done to create a photograph. Beside the setting used, I learned the lens used can create a completely different look to the same object/scene, marco produces an up close image, wide angle captures a large area, and fisheye gives the photo a distorted look. Not only the lens but the processing used adds to the creation of the photograph.

Recently, for a change and to push myself a little further, I started using my wide angle filter (and now find I need want a wide angle lens) and really liked the new look of my photos. Then to push myself a bit more, I decided to play around with some processing. HDR to be exact, and I am addicted. I find the surreal look to be different and fun. I don’t believe it is for use in every photo but I do like it for the ones I have taken along the boardwalk.

Because I have taken some many photos recently and I have been playing around creating new looks to them, be prepared to view several over the next few days. 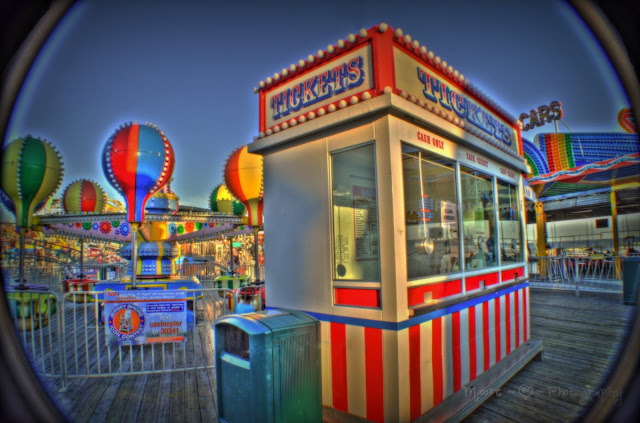 "The processing is beautiful! I love how I feel I’m looking through a looking glass at something fantastical… Alice In Wonderland-ish to me."
Posted by Trish ~ ♥ ~ at 9/01/2011

That is really cool - great capture.

I have one of those Go-Pro cameras, you know, the helmet mounted camera you see people wearing to capture their action activities. The camera is high definition and can take individual images also. So anytime you see a fish-eye view image on my blog, it is done with that little camera and no one is the wiser...except now you. So as you hinted, this opens up another whole realm of photo opportunties. My favorite shots with it are by looking straight up in the sky in a forest. All the trees bend in and it looks cool. Also my new macro lens...well there is another whole world. Have fun with your images. That is what it is all about.

This is such a neat image with the PP. I love the arcade-y feel to it with the bubbly colors and such!

I love HDR photography. Are you using Photoshop to pull the images together or did you get an HDR specific program. I would love to try but I'm pretty intimidated by the whole process. If you haven't already, you should definitely look up Trey Ratcliff...amazing HDR photographer.

This is a realm I know absolutely nothing about, but it seems very interesting.

I wish I had time to play aroundIve literally been buried for the past two and a half weeks with editing and not fun stuff
I love that you can experiment
Would you be willing to do a post on how tos for HDR?

What a great subject for an HDR photo!!! Yu did a fantastic job! This is something I need to find out more about. You probably saw I tried it with one image in Photoshop. I tried it again with 3- but it wouldn't do it. Or rather, I did it wrong. . .
Are you using Photomatix, PS, PSE or something else? Or is that a trade secret?

So cool, love the fish eye look to it, fantastic colours!

Childhood, that is the feel

Now you're not only "taking" a picture, you're "creating a photograph". It is a whole new realm-- one that you're totally rocking!

Really like this...cool! Understand what you mean about looking for something different...in the same slump. You are very creative though. :)

I love the HDR on that photo. Very cool.

Such festive colors and the wide angle look really adds to the photo!
I should be more adventurous in my photo taking :-)
(Found through the Click It Up A Notch contest)

This is completely FABULOUS! Love it!

Did you use photoshop to do the HDR or did you actually get Photomax or whatever that program is? Would love to play around with HDR!

It's so inspiring to hear that you continue to push yourself! I love it! This photo works really well with HDR and I agree that it isn't for every photo but I love this one. I can hear the carnival music in the background :O)

I noticed a difference in your photos lately. I was going to ask you about it, but I haven't had time. I love that you're pushing yourself and trying new things. Your photos...and the colors are terrific, Trish!

Wonderful shot... and love the HDR! One day I might give it a try. I am starting to have a little extra time... we'll see what I can learn!! Thanks for inspiring me to do more too! =)