This, nearly 100 year old, 1915 wood carousel was carved and assembled by the Dentzel company of Philadelphia. It was purchased by a local town and placed in a Special Carousel House along the shoreline. With it’s huge success, it became the origin of the boardwalk.

As a child, my sister, friends and I would run around it. Once we were able to reach the correct speed we would jump on, much like the freeloader on train cars, and catch a brief ride prior to being chased off by the operator. We would run off laughing at being able to steal yet another free ride.

Through the years it has needed restoration and lots of TLC. Dear friends of mine donated and worked on this project. For their invaluable efforts two horses were named for them. My friends, now in their 80s, have since moved.

The Merry-Go-Round has survived two major fires and several times over the recent years the owners have considered dismantling and selling off the individual horses, which would easily bring in over a $100,000 apiece. This was met with great opposition from both historians and local folks.

On yet another rainy summer day, I visit. I am now to old to reach it's speed (and besides a fence has be erected around it to prevent freeloaders) so I settle to just sit and listen to the sound of it’s Wurlitzer Military Band Organ while many a fond memory turn circles counter clockwise in my head. 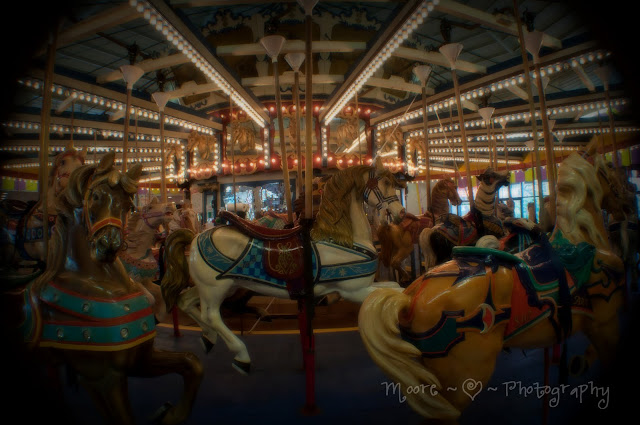 A great shot and a great story.

oh how i loved merry go rounds as a kid!! Guess I still do

So...I thought the only thing you had stolen was Silly Putty! You never told me you stole merry go round rides! Somehow the thought of you running around a carousel just to hop on at the last second has me cracking up. Especially since you can't even watch them now without getting sick!
Ok-- enough making fun of you :)

Fantastic shot!!! I love the story too.

What a cool antique carousel, and great memories to go along with it.