While we were on the University campus, we stopped by their bowling alley. This university is located on the grounds which were originally the winter home of a millionaire railroad tycoon. During the early 19th century, bowling was a sport which belonged to the social elite. This historic alley, built in 1899, was recently restored to it’s original state. Today, it is the nation’s oldest operational bowling alley. 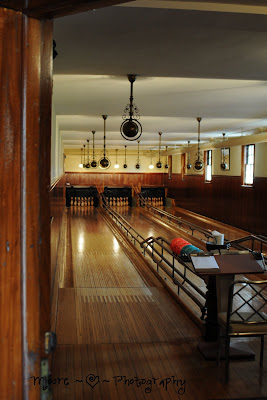 That is beautiful! I love it.

Wow! There's actually a pretty bowling alley somewhere? That in itself is an awesome find!! Great picture!

Looks like you did your research- it is pretty cool, and you did a great job capturing it

Wow...so cool! And, that capture is fantastic.

How interesting the oldest!

I'm a sucker for light hitting the wood like that! Very nice capture--and thanks for the historical details!

That is so cool! What a neat thing to find.

Only 3 lanes. I'd love to go bowl there! It's gorgeous!

The perspective and light are gorgeous in this shot. I love that the alley is over 100 years old! Thanks for sharing this image Trish.

That is a really cool picture.