Phriend and I had planned our weekly daytrip, this time we were off to Jenkinson’s Aquarium. Can I just say it was one of the most difficult places to take a photograph with any kind of clarity. It was dimly lit to say the least. We played with exposure, we played with shutter speed and I did the unthinkable and raised my ISO to 3200. This resulted in me, alone, taking 810 photos. Yes, 810! After uploading I deleted 588, after taking a closer look at them I was happy with about 29 of them, a little less than 3%. Was it a successful day? Yup, cause we had a blast! 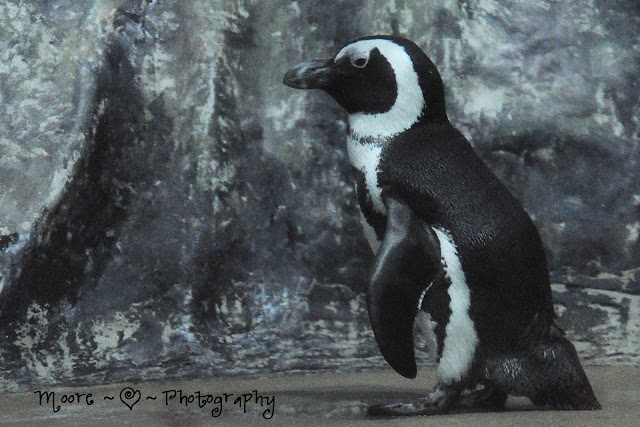 Aww, how cute is he!
Sounds like a great place for a day trip. WOW, that's a lot of pictures taken!

Oh my, I've have always wanted to own one of those guys. They have always been my favorite. :) Glad you guys had a blast and such a great attitude about taking that many pictures and happy with what came out!

Keara @ Now I Know What Life Is All About said...

It sounds like a successful day to me! I am so snap-happy that I always end up with tons of photos that get tossed.

Wow, that is a lot of photos. But yanno, better to be safe than sorry. :) This is super cute. I love these guys.

Such a perfect capture :)
You totally rocked that place after you got the settings down!

I love the penguins! I just dont love how stinky they can be...hehe

The great thing about digital photography! You can shoot your heart out and just delete what you don't want. :)

Love this photo! Penguins are awesome!

I think you did a great job of getting a clear shot here! B&W is perfect for this picture:)