I had read last evening's moon was 30% brighter and appeared 18% larger then ever before. I was glad when I received a text message from Phriend. We had to head off to the bay beach to try and capture this event. We arrived at sunset, which was a splendid show. We waited for the moon to appear and I can honestly say I do not ever remember watching the moon rise. I picked the perfect night for this first. The spectacular colors of the sunset were reflecting off the moon's surface creating a brilliant orange color.
While I really like the composition of the photo, clarity and sharpness are lacking. I had my settings at ISO 200, f/6.3, 30 sec. There was a strong cold wind blowing, which caused the camera to shake, even though it was mounted on a tripod. I should have raise my ISO to at least 1600 so I could lower my exposure time. I guess my brain was frozen as I didn’t even think of that while standing on the icey cold beach. 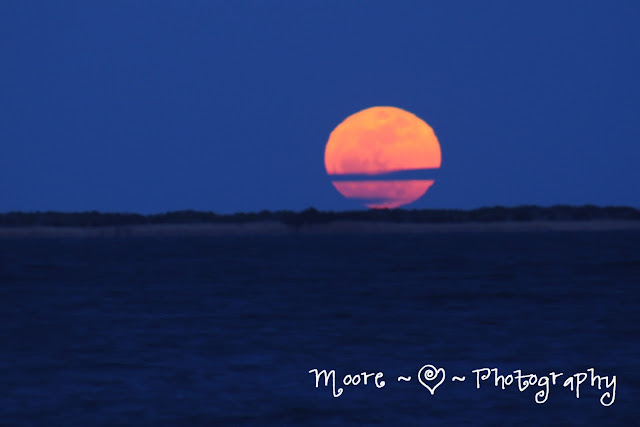 Wow what an amazing photo of the moon! I was checking out some of your other photos from the week! Very cool cloning picture. I look forward to seeing more of your ideas. The pic of Ashbury park is really neat too!

Oh goodness, I LOVE this. I wish I would have thought to watch the moon rise. I definitely feel you on the camera shake. I finally found my tripod connector for my camrea this morning, wish I would have had it last night.

I believe you could sell prints of this one. It's gorgeous!

I think it looks stunning! I was so bummed I couldn't get a pic here, it was raining and cloudy all day. Love the color.

A big DUH on our part! Wow- I can't believe we didn't think to raise the ISO...lol.
Oh well...next time.
It's still a beautiful picture with gorgeous colors!

Gorgeous image of the moon as it's rising. And you braved the cold to get this shot!

WOW! What a gorgeous capture.

I agree that it is gorgeous! What a great thing to witness!

Beautiful shot! I love the colors and the composition... wonderful!

an amazing photo - so wonderful you captured it -
I did some of the moon this weekend - it was in a perfect circle shape!!

Well either way its a great shot!