A current topic on the flickr challenge I joined is Oriental.  Three days into the week and I had nothing, thinking this was one topic I would have to pass on. Then I remembered ~

My dad, being a bit of a history buff, has a small collection of military memorabilia. Among his historic items is this WW II Japanese flag. As far as we know these flags were given to young soliders as they were heading off to war. Family members and friends would write well wishes and prayers of safety on them. Often the young man carried it in his uniform while on the battle fields.

My dad had it translated and found the young soldier’s name is on it. He contacted the Japanese Consulate in the hopes of finding remaining relatives of this solider and returning the flag to them. He had no luck, so it stays within my family. 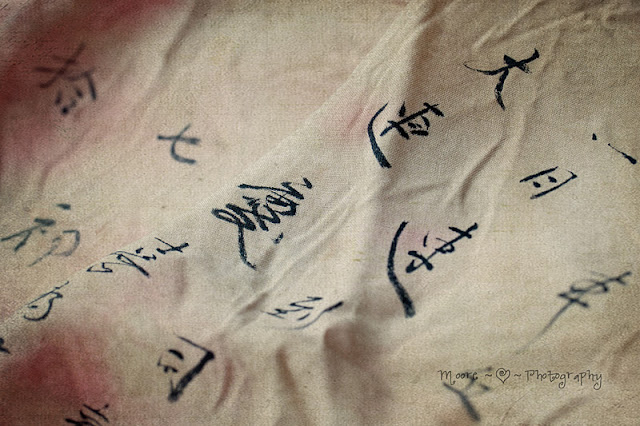 How cool! And the story is even cooler :)
Happy New Year! (I'm a Dragon BTW)

What an awesome piece of history and story to go along with the picture- and perfect for the start of Chinese New Year!

What a heart warming story. It's too bad it could not be returned to the family.

Sweet story, Trish, and beautiful memorabilia. What a treasure. I have a family Bible that we've tried to find descendants to, but haven't had any luck. Maybe one day.