I sat in pre-calculus class staring out the window, and while this is nothing new, today it was raining. This made me think, “Weather only a duck would like”. After class, being in need of a break, I ventured out to the refuge to see if, in fact, ducks do like rainy weather.

As I started out along the 8 mile drive, my first encounter was with the Northern Shoveler. Although he looks quite similar to the Mallard, he was quickly recognized by his long spoon shaped bill. He and his Mrs. didn’t seem to be bothered by the raindrops. He had taken her to the best restaurant in town and they just went about bobbing under water looking for a quick little lunch. Driving on, I spotted the glossy green head of the Mallard. He sat with his bride, the two preening themselves. After straightening out their ruffled feathers, they waddled into the water. Seemingly, not even knowing it was raining. Mr. Pintail, holding his head high, looking all studdly with his long needle pointed tail feathers, glided along the water’s surface. Solo and with Spring not far off, surely he was in search of a lady friend. Rain, what rain? He was more concerned with the whereabouts of the girls. 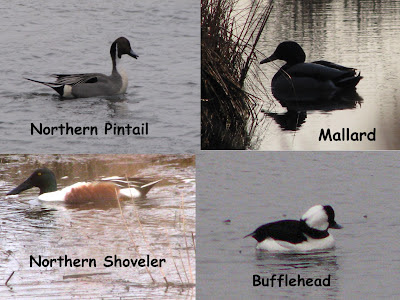 The Hooded Merganser sat up among the reeds, sheltering herself from the rain. Or was she hiding from Mr. Pintail? The Canada Geese, in a gaggle, were making their usual honking noises. Possibly they were complaining about the drearily day, maybe not. A bright white Snow Goose, standing along the water’s edge, was staring off, perhaps she too had enough of calculus or perhaps she was using it to calculate the best path to her next meal.

As I neared the roads end, there in the small overflow pond swam the Bufflehead. Well, with a name like Bufflehead, do you even know it’s raining? 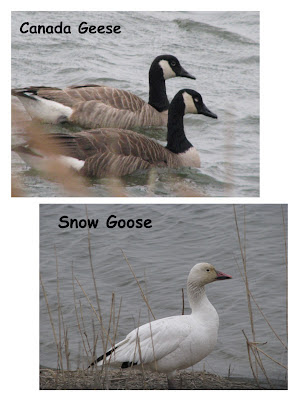 Delightful! I know you're studying to be a biologist, but I think you have the heart of a poet. I really enjoyed all of the lovely imagery and metaphor in this post: I felt like I was watching the ducks right alongside you. Thanks!

Wow, it sounds like you saw a lot of birds during your drive today. But, is it really a good idea to be looking out the window during your class?! LOL

Kathryn ~ thank you for the kind words. I certainly am not a poet.

L^2 ~ Yes, there are plenty of our feathered friends at the refuge. No, I probably shouldn't be staring out the window. But, hey, it's my last 4 credits!