Walking the grounds while touring the fort provided the chance to take a closer look than allowed from the inside of a vehicle. The abandoned Batteries are fenced off with heavy chains and padlocks holding the gates closed.

Stopping by Battery Granger, standing in awe of this decaying 100 + year, massive concrete structure revealed an unlocked gate. The large linked chain hang in an open circle and the padlock was among the missing. I nodded to B. He moved his head in an up and down motion signaling a yes, go ahead, I dare ya. I pushed the rusting gate open wide enough to squeeze myself through. At risk of being arrested, I tip toed into the hallowed ground.

As I prepared to take several photos of the now vacant area, in my mind I could see the Soldiers hurrying up the narrow stairway to get view of the open ocean ahead for them. Although several of the black iron gates were partly open, I was too creeped out to investigate the darkened inners. 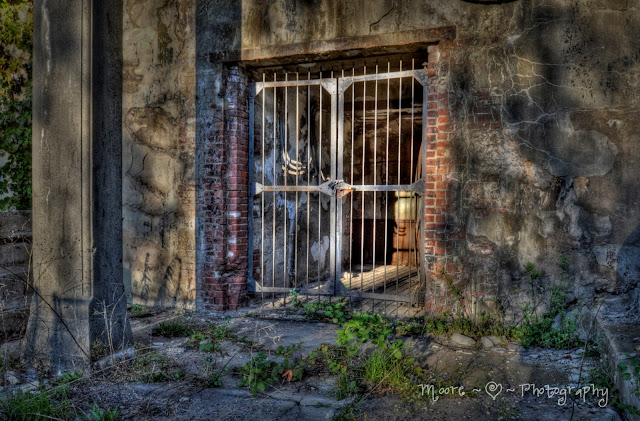 This picture is *perfect* in HDR! I found myself looking closer to see if there really were skeletons in that chamber. Perfect picture for Halloween!

So much history! You captured it wonderfully and the HDR really suits this photo.

wow, that is a striking effect in your photo

Great photo for your excellent HDR processing! It looks like an image in a scary book! Superb!