Over the last several days B and I have slowly been introducing “Yellow Girl” to the bay. We decided it would be in her best interest for us to leave “Black Dog” at home, as Willow has a tendency to be … mmmm, a bit over zealous. We thought it best for “Yellow Girl” to explore on her own, to play in sand without being run over, to test the waters without being dragged into the deep end. To be able to sniff the crabs and shells without it being a game of chase, to taste the seaweed without it becoming a game of tug. “Yellow Girl” was in her glory, sniffing, exploring, tasting sand and licking the water, all new and exciting.

Yesterday we thought we were at the safety point of including the big “Black Dog”. And at first we were delighted in watching our girls play at the beach, chasing, jumping, sniffing, running in and out of the bay and playing in the waves. Then things took a turn, Willow starts running like the devil himself is chasing her, she runs up though the reeds and dives directly into the blackish mud of the still water of the overflow. She sinks in up to her chest and before we could grab for the “Yellow Girl”, she follows suit. Yup, right up to her neck!

Two baths and two days later, we are still cleaning the car, scrubbing the bathtub, washing the floors, soaking the stains out of our clothes and doing oodles of laundry. And yes, we are still laughing at the sight of our girls looking like they were dipped in chocolate! 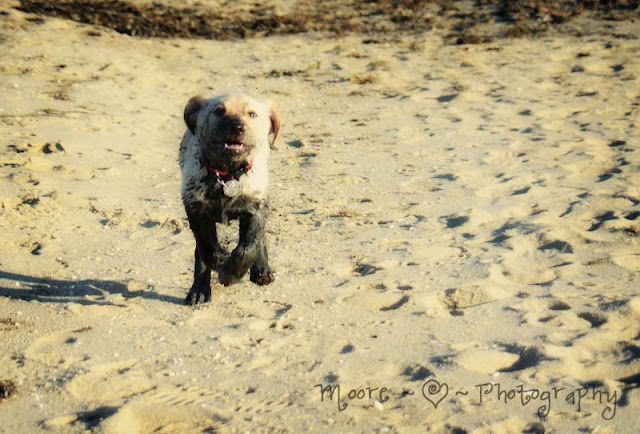 Ohmygoodness! And I love how your first instict is to take a picture!