We were awaken at 5 a.m. by the sound of rain hammering the roof. Once the puppies heard us stir we knew our day was off to a start. Thirty minutes later the pups were had been outed, watered, and fed and the rains had subsided. The decision was made to check on the Spring migration.

After stopping for a quick bagel to go, we were on the road heading south. The day started to lighten from the rising sun only to reveal a dense fog. We continued on our way.

Upon arrival at Forsythe the air was moist and thick with no-see-ums and pine flies. The grounds and skies were absent of avian. Oh sure, the usual mass number of red wings were clinging to the reeds, the peeps were digging for their breakfast, which lay hidden under the tar like mud, and the occasional yellow throat could be seen flitting about. The Osprey lay low in their nests with only the top of their heads visible through the heavy fog, there were no Egrets on the hunt and we spied only two terns sitting guard on their posts.

What we did find, were unusual number of turtle strolling along the roads edge and to our eyes delight a massive number of spider webs woven between the reeds and fencing. With the moisture from the earlier rains and the light from the morning sun, they appeared as jeweled lace. 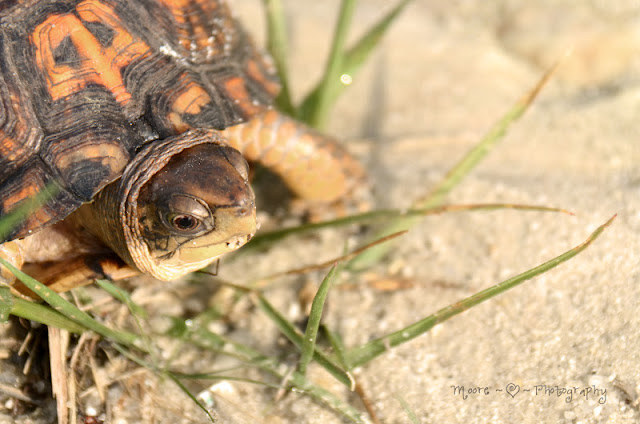 What a cutie he is!